We were extremely honoured to welcome Professor Larry Temkin (Rutgers University) to Oxford to deliver the 2017 Annual Uehiro Lectures on 6, 8 and 10 November.  The engaging lectures were fully booked out well in advance, and were each followed by a lively discussion.

Professor Larry Temkin Larry S. Temkin is Distinguished Professor and Chair of Philosophy at Rutgers University.  He graduated number one from the University of Wisconsin/Madison (B.A.-Honors Degree, 1975), before pursuing graduate studies at Oxford University (1978-79), and Princeton (Ph.D., 1983).  Temkin's book Inequality (Oxford University Press, 1993), was hailed by critics as "brilliant and fascinating," "an extraordinary achievement," and as "one of the most important six or seven contributions to analytical political philosophy in the … whole of [the twentieth] century."  His book Rethinking the Good:  Moral Ideals and the Nature of Practical Reasoning (Oxford University Press, 2012) has been described as a "tour de force," "a genuinely awe-inspiring achievement," and "an utterly original work of philosophy, almost breathtakingly so."  Temkin has lectured extensively worldwide, including for the World Health Organization, the World Bank, and the Institute for Health Metrics and Evaluation (funded by the Gates Foundation), and his individualistic approach to inequality has been adopted by the World Health Organization and the Gates Foundation in their measurements of the Global Burden of Disease.  Temkin has received fellowships from Harvard University's Safra Foundation Center for Ethics, All Souls College Oxford, the National Institutes of Health, the Australian National University, the National Humanities Center, the Danforth Foundation, and Princeton University’s Center for Human Values, where he was the Laurance S. Rockefeller Visiting Professor for Distinguished Teaching.  He is also the recipient of eight major teaching awards.  Temkin will be a Visiting Fellow at Corpus Christi College in Hilary Term 2018.

The world is filled with people who are badly off.  Each day, many die from hunger or disease, much of which seems easily preventable.  Yet the world is also filled with many who are well off, some extraordinarily so.  This vast inequality, between the world’s well off and the world’s worst off, gives rise to an age-old question.  What, if anything, ought those who are well off to do on behalf of those who are badly off?  In these Uehiro Lectures, I aim to explore the nature and basis of our obligations, if any, to the needy, and some problems that may arise when the better-off attempt to ameliorate the plight of the worse-off.  In doing this, I will explore a wide-range of empirical and philosophical issues.

In this first Lecture, I introduce a version of Effective Altruism, which holds, roughly, that insofar as the well-off give to charity, they should identify and contribute to the most effective international relief and development organizations.  I then present an alternative, pluralistic approach, arguing that in addition to the sort of consequentialist-based reasons for aiding the needy favored by Effective Altruism, there are virtue-based and deontological-based reasons for doing so.  I then present Peter Singer’s famous Pond Example, which has had a profound effect on many people’s thinking about the needy.  I note that Singer’s example is compatible with both Effective Altruism and my pluralistic approach.  I then offer variations of the Pond Example, together with other considerations, in support of my approach.

My discussion shows that despite its far-reaching impact, Singer’s Pond Example doesn’t actually take us very far in answering the question of what we should do, all things considered, to aid the world’s needy.  Unfortunately, my discussion isn’t much better in that regard, except that it reveals that there are a wide-range of morally relevant factors that have a bearing on the issue, and that we must be fully responsive to all of them in considering what we ought to do in aiding the needy.  The “act so as to do the most good” approach of Effective Altruism reflects one very important factor that needs to be considered, but it is not, I argue, the only one.

I consider a number of possible disanalogies between saving a drowning child and giving to an international relief organization.  These include whether those needing help are members of one’s own community, whether they are near or far, whether one’s aid requires the assistance of many intervening agents, whether one is actually saving lives, whether corruption is a worry, whether those needing assistance are innocent and/or not responsible for their plight, whether the needy are victims of an accident or social injustice, and whether anyone stands to benefit from one’s intervention other than the needy themselves.  I show that some of these disanalogies may have important normative significance, making the case for contributing to international aid agencies much less clear than the case for saving the drowning child in Singer’s famous example.

In addressing these topics, I argue that we must be attuned to the many direct and indirect ways in which international aid efforts may inadvertently benefit the perpetrators of grave social injustices, incentivizing such injustices.  Similarly, we must be aware of the possibility that our aid efforts may end up rewarding corrupt leaders whose policies have contributed to hybrid natural/man-made disasters, thus encouraging such disastrous policies.   Furthermore, I note that aid organizations have every incentive to emphasize the good that they accomplish, and to not look for, ignore, or even cover up any bad effects that may result from their interventions, and that independent agencies assessing aid effectiveness may lack the means of accurately determining all the negative effects to which international aid efforts may give rise.  Thus, however compelling it may be, Singer’s Pond Example depicts a simple situation that is a far cry from the complex reality with which international development agencies have to contend.  Accordingly, much more needs to be considered before one can pass judgment on the overall merits of funding international aid organizations.

Obligations to the Needy:  Some Empirical Worries and Uncomfortable Philosophical Possibilities

In this third Uehiro Lecture, I consider a number of worries about the possible impact of global efforts to aid the needy.  Among the worries I address are possible unintended negative consequences that may occur elsewhere in a society when aid agencies hire highly qualified local people to promote their agendas; the possibility that highly successful local projects may not always be replicable on a much larger regional or national scale; the possibility that foreign interests and priorities may have undue influence on a country’s direction and priorities, negatively impacting local authority and autonomy; and the related problem of outside interventions undermining the responsiveness of local and national governments to their citizens.

I also discuss a position that I call the Capped Model of Moral Ideals, which may have a bearing on the intuitively plausible approach of always prioritizing the greatest need when making one’s charitable contributions.  Another issue I discuss is the possibility that efforts to aid the needy may involve an Each/We Dilemma, in which case conflicts may arise between what is individually rational or moral, and what is collectively rational or moral.  Unfortunately, it is possible that if each of us does what we have most reason to do, morally, in aiding the needy, we together will bring about an outcome which is worse, morally, in terms of its overall impact on the global needy.

The lecture ends by taking stock of the main claims and arguments of all three Uehiro Lectures, and considering their overall implications for our thinking about the needy.  I consider the implications of my discussion for Peter Singer’s view, and the implications of my view for the approach and recommendations of Effective Altruism.  I also consider where my discussion leaves us given my pluralistic approach to thinking about the needy.  I have no doubt that those who are well off are open to serious moral criticism if they ignore the plight of the needy.  Unfortunately, however, for a host of both empirical and philosophical reasons, what one should do in light of that truth is much more complex, and murky, than most people have realized.

We are delighted that Professor Temkin's book has been selected to feature in Oxford University Press' digital campaign 'Philosophy in Focus'.

For February 2022, 'Philosophy in Focus' shines a light on 'social justice' where OUP authors address questions on human rights, equality, social responsibility, and what is needed to achieve social justice. Explore a range of free content on topics such as race, gender, feminism, religion, democracy, the ethics foreign policy and more. 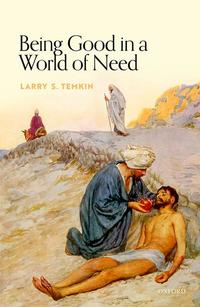 Being Good in a World of Need

In a world filled with both enormous wealth and pockets of great devastation, how should the well-off respond to the world's needy?

This is the urgent central question of Being Good in a World of Need. Larry S. Temkin, one of the world's foremost ethicists, challenges common assumptions about philanthropy, his own prior beliefs, and the dominant philosophical positions of Peter Singer and Effective Altruism. Filled with keen analysis and insightful discussions of philosophy, current events, development economics, history, literature, and age-old wisdom, this book is a thorough and sobering exploration of the complicated ways that global aid may incentivize disastrous policies, reward corruption, and foster “brain drains” that hinder social and economic development.

Using real-world examples and illuminating thought experiments, Temkin discusses ethical imperialism, humanitarian versus developmental aid, how charities ignore or coverup negative impacts, replicability and scaling-up problems, and the views of the renowned economists Angus Deaton and Jeffrey Sachs, all within the context of deeper philosophical issues of fairness, responsibility, and individual versus collective morality. At times both inspiring and profoundly disturbing, he presents the powerful argument that neglecting the needy is morally impermissible, even as he illustrates that the path towards helping others is often fraught with complex ethical and practical perils. Steeped in empathy, morality, pathos, and humanity, this is an engaging and eye-opening text for any reader who shares an intense concern for helping others in need.