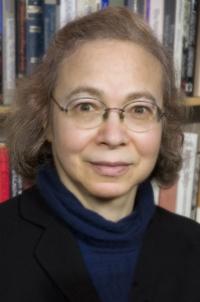 We were honoured to welcome Professor Kamm to Oxford to deliver the Annual Uehiro Lectures in Practical Ethics in 2008.

The lecture series was entitled 'Terror, Torture and War', and were published as a book by Oxford University Press in 2011.

Frances Kamm is the Littauer Professor of Philosophy and Public Policy in the Kennedy School of Government, as well as Professor of Philosophy in the Faculty of Arts & Sciences. She is the author of Creation and Abortion (1992); Morality, Mortality, Vol. 1: Death and Whom to Save From It (1993); Morality, Mortality, Vol. 2: Rights, Duties, and Status (1996); and, most recently, Intricate Ethics: Rights, Responsibilities, and Permissible Harm (2007). She also has published many articles on normative ethical theory and practical ethics. Professor Kamm has held ACLS, AAUW, and Guggenheim fellowships, and has been a Fellow of the Program in Ethics and the Professions at the Kennedy School, the Center for Human Values at Princeton, and the Center for Advanced Study at Stanford. She is a member of the editorial boards of Philosophy & Public Affairs, Legal Theory, Bioethics, and Utilitas, and was a consultant on ethics to the World Health Organization.  Kamm delivered the 2008 Annual Uehiro Lectures, and the resulting book 'Ethics for Enemies: Terror, Torture, and War' has been published by Oxford University Press. 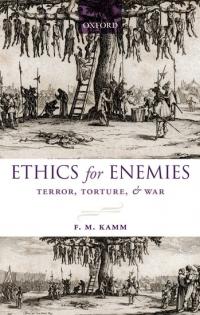 Ethics for Enemies comprises three original philosophical essays on torture, terrorism, and war. F. M. Kamm deploys ethical theory in her challenging new treatments of these most controversial practical issues. First she considers the nature of torture and the various occasions on which it could occur, in order to determine why it might be wrong to torture a wrongdoer held captive, even if this were necessary to save his victims. In the second essay she considers what makes terrorism wrong—whether it is the intention to harm civilians, rather than harm to them being 'collateral damage,' or something else—and whether terrorism is always wrong. The third essay discusses whether having a right reason, in the sense of a right intention, is necessary in order for a war to be just. Kamm then examines ways in which the harms of war can be proportional to the achievement of the just cause and other goods that war can bring about, so as to make the declaration of war permissible.

"This book displays the impressive conceptual sophistication, argumentative rigor and use of imaginary examples characteristic of Kamms philosophical work. It is a valuable addition to the theoretical literature." - (Seumas Miller, Notre Dame Philosophical Reviews)

"closely reasoned and difficult, but powerful, indeed dazzling, display of philosophical imagination. It hardly needs saying that this is an important contribution to applied ethics. It is impossible in a review adequately to summarize and begin to assess the rich detail of these essays." - (Joseph Boyle, Ethics)

"a meticulous, imaginative and often provocative contribution to the ethics of violence ... Kamms analyses of the intricate ethics of the principles of right intention and proportionality in the just war, and of the definitional and moral dimensions of interrogational torture, are no less imaginative and challenging than her reflections on terrorism. Altogether, Ethics for Enemies is a highly important contribution to the literature by a seminal philosopher." - (Christopher Finlay, International Affairs)