How should we human beings treat the other animals?  What do we owe to them, if anything?  These are not only questions that we have to address at the legal and political level, but also questions that we all make personal decisions about every day of our lives.  We make them when we decide what to eat, what to wear, what products to use, what medications to take, and how to use land. In these lectures I will raise some fundamental questions about the moral and legal standing of the other animals: about the basis of our moral obligations to them, and what those obligations are, and about whether it makes sense to think that animals might have legal rights.

Professor Korsgaard got her BA from the University of Illinois at Urbana and her PhD at Harvard, where she studied with John Rawls. After working at Yale, the University of California at Santa Barbara, and the University of Chicago, she returned to Harvard in 1991. She works in moral philosophy and its history, the theory of practical reason, the philosophy of action, and personal identity.  She is the author of The Sources of Normativity (Cambridge 1996), an expansion of her 1992 Tanner Lectures on the grounds of obligation; Creating the Kingdom of Ends (Cambridge 1996), a collection of papers on Kant’s moral philosophy and Kantian approaches to issues in contemporary philosophy; The Constitution of Agency (Oxford 2008), a collection of papers on practical reason and moral psychology, and Self-Constitution:  Agency, Identity, and Integrity (Oxford 2009), an account of practical reason and obligation that grounds them in the nature of agency.  She is currently working on The Natural History of the Good, a book about the place of value in nature. 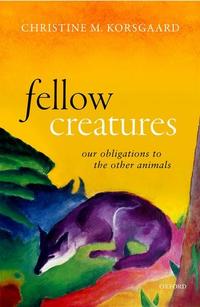 Fellow Creatures: Our Obligations to the Other Animals
Christine M. Korsgaard

Christine M. Korsgaard presents a compelling new view of humans' moral relationships to the other animals. She defends the claim that we are obligated to treat all sentient beings as what Kant called "ends-in-themselves". Drawing on a theory of the good derived from Aristotle, she offers an explanation of why animals are the sorts of beings for whom things can be good or bad. She then turns to Kant's argument for the value of humanity to show that rationality commits us to claiming the standing of ends-in-ourselves, in two senses. Kant argued that as autonomous beings, we claim to be ends-in-ourselves when we claim the standing to make laws for ourselves and each other. Korsgaard argues that as beings who have a good, we also claim to be ends-in-ourselves when we take the things that are good for us to be good absolutely and so worthy of pursuit. The first claim commits us to joining with other autonomous beings in relations of moral reciprocity. The second claim commits us to treating the good of every sentient creature as something of absolute importance.

Korsgaard argues that human beings are not more important than the other animals, that our moral nature does not make us superior to the other animals, and that our unique capacities do not make us better off than the other animals. She criticizes the "marginal cases" argument and advances a new view of moral standing as attaching to the atemporal subjects of lives. She criticizes Kant's own view that our duties to animals are indirect, and offers a non-utilitarian account of the relation between pleasure and the good. She also addresses a number of directly practical questions: whether we have the right to eat animals, experiment on them, make them work for us and fight in our wars, and keep them as pets; and how to understand the wrong that we do when we cause a species to go extinct.

Lecture One:  Animals, Human Beings, and Persons
Legitimate differences in the ways we treat animals, human beings, and other entities that have moral or legal rights – legal persons – must be based on the differences between them. Philosophers have traditionally cited a variety of factors – rationality, sentience, having interests – as morally significant.  In this lecture I discuss what the morally relevant similarities and differences between these kinds of entities might be.

Lecture Two: The Moral Standing of Animals
Human attitudes towards the other animals exhibit a curious instability.  Nearly everyone thinks we have some obligations with respect to the other animals – that whenever possible, we should treat them “humanely.” Yet human beings have traditionally regarded nearly any reason we might have for overriding this obligation, short of malicious enjoyment of their suffering, as a sufficient reason.  We kill or hurt animals in order to eat them, in order to make useful or desirable products out of them, because we can learn from experimenting on them, because they are interfering with our own agricultural projects, or even for sport.  Could it really be true that animals have moral standing, but that it never has any force against human interests?  In this lecture I will present an account of why animals have moral standing, based in Kant’s moral philosophy, according to which the answer to this question is no. Our duties to animals are more stringent than our current practices reflect.

Lecture Three: The Question of Legal Rights for Animals
The instability in human attitudes about the moral standing of animals is reflected in our laws.  Animal welfare laws offer animals some legal protections, but those protections do not take the form of animal rights. Partly as a consequence, these laws are often ineffective. Organizations with an interest in activities that are harmful to animals, such as factory farms or experimental laboratories, often manage to get their own activities exempt from the restrictions or the animals they deal with exempt from the protections. On the other hand, many people find the idea that animals either should have legal rights or do have natural rights absurd.  Rights, many believe, only exist among those who can stand in reciprocal relations to each other, and who can have obligations correlative to their rights. Animals do not stand in such relations to us, or to each other. In this lecture I will argue for a Kantian conception of a kind of legal rights for animals is not subject to these objections.

Lecture 3 MP3: The Question of Legal Rights for Animals