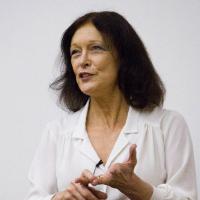 We were delighted to announce that Professor Radcliffe Richards agreed to deliver the Annual Uehiro Lectures in Practical Ethics in 2012.

The lecture series was entitled 'Sex in a Shifting Landscape'.

After a hundred and fifty years of feminism, we are still struggling to achieve a satisfactory legal and social framework for managing the relations of the sexes. This is partly, of course, because so many men have been unwilling to give up their traditional privileges, and the original feminist project is still far from finished. But more fundamentally than that, we have no clear conception of what a fair arrangement would be. You can regard some kinds of inequality as definitely unjust while being in considerable doubt about others. And even if we ever thought we had reached an ideal solution, the endlessly shifting landscape of technological change would soon throw things into turmoil. Reproductive technology alone has already taken us far out of our moral depth.

Even if there could be no such thing as a definitive solution, however, a good deal can be said about particular aims and attitudes. There is still a great deal of confusion in public debate, in which many arguments depend on fallacies of equivocation or dubious, unrecognized presuppositions. By drawing on some elements of the original nineteenth-century debate, I hope to show how various present-day ideas and arguments can be rescued from some of this confusion, and cast light on such contested areas as sex equality, the natures of women and men, ideology, political correctness and the appropriate aims of feminism.

Janet Radcliffe Richards is Professor of Practical Philosophy at the University of Oxford, and Distinguished Research Fellow at the Oxford Uehiro Centre for Practical Ethics. Formerly she was Lecturer in Philosophy at the Open University, and then Director of the Centre for Bioethics at the medical school at University College London. She is a philosopher who originally specialized in metaphysics and philosophy of science, but has now for many years concentrated on the practical applications of philosophy, and is the author of The Sceptical Feminist (1980) and Human Nature after Darwin (2000). Work for her latest book, The Ethics of Transplants: why careless thought costs lives (Oxford University Press, March 2012) originated many years ago in a short newspaper article of hers which was picked up by transplant surgeons, and since then she has been a frequent speaker at transplant conferences around the world.

Listen to an audio recording of the first lecture here and read a blog post by Owen Schaefer.

More: Listen to an audio recording of the second lecture here and read a blog post by Jonny Pugh.