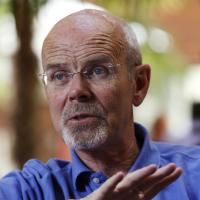 We were honoured to welcome Professor Pettit to Oxford to deliver the Annual Uehiro Lectures in Practical Ethics in 2011.

The lecture series was entitled 'Making Good: The Challenge of Robustly Demanding Values', and published as a book by Oxford University Press in 2017.

Philip Pettit is the Laurence S. Rockefeller University Professor of Politics and Human Values at Princeton University, where he has taught political theory and philosophy since 2002. Irish by background and training, he was a lecturer in University College, Dublin, a Research Fellow at Trinity Hall, Cambridge, and Professor of Philosophy at the University of Bradford, before moving in 1983 to the Research School of Social Sciences, Australian National University; there he held a professorial position jointly in Social and Political Theory and Professor of Philosophy. He was elected fellow of the American Academy of Arts and Sciences in 2009, and honorary member of the Royal Irish Academy in 2010; he is also a fellow of the Australian academies in Humanities and Social Sciences. He holds honorary professorships in Philosophy at Sydney University and Queen's University, Belfast. In 2010 he won a Guggenheim fellowship and is spending 2010-11 as a fellow of the Center for Advanced Study in the Behavioral and Social Sciences at Stanford University.

Professor Philip Pettit gave the 2011 Uehiro Lectures on 1-3 June with his characteristic imaginativeness, clarity, breadth of knowledge, and intellectual generosity. As a result, we were treated to a brilliant set of three lectures and ensuing discussions. Pettit set out by developing the concept of “robustly demanding" goods, whose existence in the actual world depends not just on a good state of affairs occurring in the actual world, but on good states of affairs occurring in various other possible worlds as well. In his first lecture, Pettit suggested that virtues deliver various robustly demanding goods including love and friendship, and argued that we desire the virtues in ourselves and others because of the value of robustly demanding goods. In his second lecture, he argued that freedom, dignity and respect are best conceived of as robustly demanding goods, and that they can and should be delivered by laws, norms and internal constraints. In his third lecture, Pettit defended consequentialism by arguing that if a consequentialist were to value robustly demanding goods, his theory would be significantly less revisionary of our ordinary moral judgments than consequentialism is typically taken to be. The arguments of all three lectures were surprising and creative, and the lectures will leave consequentialists and non-consequentialists alike with much to reflect on about the nature of the good and the right.

Lecture 1. Robust demands and the need for virtue
My loyalty or fidelity or honesty means that I can be relied upon to display a concern for your interests across a range of possible scenarios, not just in actual or probable circumstances. But the good constituted by this robust concern materializes as a result of my virtuous dispositions, not just as a result of what I do. And so virtue is a way of making good, not just an aid to doing good; it creates value in its own right. Listen to Lecture 1 (MP3)

Lecture 2. Robust demands and the need for law
The common subjection to law means in any community that we give each other certain legal rights robustly, not just actually or probably. The freedom, respect and dignity that you thereby enjoy come about as a result of how we others are legally constrained; they do not materialize just as a result of what we do, or even, unlike virtue-based goods, as a result of what we are disposed to do. And so law is a distinct way of making good, not just an aid or prompt to doing good; it too creates value in its own right. Listen to Lecture 2 (MP3)

Lecture 3. Virtues, laws and consequentialism
The debate between consequentialism and opposing doctrines turns on whether doing right always means doing good: that is, promoting expected value. How is that debate going to develop once we see that we are required to be virtuous, not just to act virtuously; and to be legally constrained, not just to act legally? Which side in the debate is going to be better able to accommodate the robust demands of virtue-based and law-based values? Listen to Lecture 3 (MP3) 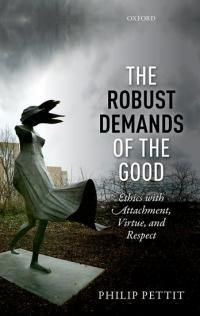 Some goods that we generate for others, as when we give them attention or help or encouragement, require us to provide that benefit under the actual circumstances where we interact. Other goods that we generate require not just that we actually provide that sort of benefit but that we are also poised to provide it, even should actual circumstances change in various ways. These goods demand robust and not merely actual beneficence. Thus to give you friendship I must be robustly, not just accidentally, attentive to your needs; to give you a virtue like honesty I must be robustly disposed to tell you the truth; and to give you respect I must be robustly committed to showing restraint in my dealings with you.
In this original contribution to normative ethics, Philip Pettit charts the range of robustly demanding goods, building on his earlier work on the robust demands of freedom. He explores the rationale behind our concern for being able to rely on others to treat us well, not just for being lucky enough to enjoy good treatment. And then he traces the implications for ethics of giving a central place to robustly demanding goods. The lessons he draws teach us that there is a tighter connection between being good and doing good than is generally recognized; that it is harder to count as doing good than it is to count as doing evil; and that there is a serious issue, ignored in many ethical theories, about the basis on which we should deliberate in day-to-day decisions about what it is right to do. The book amounts to a radical rethinking of ethics in which many standard positions shift or fall. The association between being good and doing good casts doubt on the orthodox dichotomy between evaluating agents and evaluating actions. The calibration between doing good and doing evil explains the Knobe effect, so called, as well as explaining the superficial appeal of doctrines like that of double effect. And the investigation of how to be guided in deliberating about the right reduces the gap between the recommendations of approaches like Kantianism, contractualism, and virtue theory and their common, consequentialist foe.

"Known for his cutting-edge work in social and political theory, Pettit (Princeton and Australian National Univ.) presents a superbly articulated, fine-grained, and timely account of ethics whose "first demand" is to cherish the quality of life and relationships... Essential." - (S. A. Mason, CHOICE)

"The rich, comprehensive view Pettit develops in this volume will more than repay engagement by philosophers working in normative ethics, and metaethics, and the theory of action." - (Paul Hurley, Notre Dame Philosophical Reviews Online)