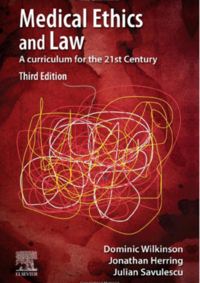 This short textbook of ethics and law is aimed at doctors in training and in practice. Medical ethics and law are now firmly embedded in the curricula of medical schools. The ability to make clinical decisions on the basis of critical reasoning is a skill that is rightly presumed as necessary in today's doctors. Medical decisions involve not only scientific understanding but also ethical values and legal analysis. The belief that it is ethically right to act in one way rather than another should be based on good reasons: it is not enough to follow what doctors have always done, nor what experienced doctors now do.

The third edition has been revised and updated to reflect changes in the core curriculum for students, developments in the law as well as advances in medicine and technology. It includes a new ‘extensions’ section, providing an outline of important developing areas in medical ethics.

The first part of the book covers the foundations of ethics and law in the context of medicine.

The second part covers specific core topics that are essential for health professionals to understand.

The third section of the book includes new chapters on cutting edge topics that will be crucial for the doctors and health professionals of tomorrow.

The Ethics of Vaccination 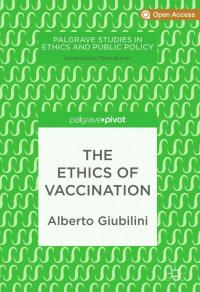 The first chapter introduces some key concepts in the vaccination debate, such as ‘herd immunity’, ‘public goods’, and ‘vaccine refusal’; and explains why failure to vaccinate raises certain ethical issues. The second chapter analyses, from a philosophical perspective, the relationship between individual, collective, and institutional responsibilities with regard to the realisation of herd immunity. The third chapter is about the principle of least restrictive alternative in public health ethics and its implications for vaccination policies. Finally, the fourth chapter presents an ethical argument for unqualified compulsory vaccination, i.e. for compulsory vaccination that does not allow for any conscientious objection.

The book would appeal both philosophers interested in public health ethics and the general public interested in the philosophical underpinning of different arguments about our moral obligations with regard to vaccination.

Arendt on Freedom, Liberation, and Revolution 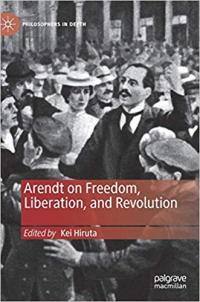 This edited volume focuses on what Hannah Arendt famously called "the raison d’être of politics": freedom. The unique collection of essays clarifies her flagship idea of political freedom in relation to other key Arendtian themes such as liberation, revolution, civil disobedience, and the right to have rights.

In addressing these, contributors to this volume juxtapose Arendt with a number of thinkers from Isaiah Berlin, John Rawls and Philip Pettit to Karl Marx, Frantz Fanon and Geoffroy de Lagasnerie. They also consider the continuing relevance of Arendt’s work to some of the most dramatic events in recent years, including the current global refugee crisis, the Arab uprisings of the 2010s, and the ongoing crisis of liberal democracy in the West and beyond.

"Kei Hiruta’s new collection represents a decided shift in ways of construing Hannah Arendt’s work. It shifts the focus from the concept of action in her texts to the experience of freedom and revolution in history. The Arab Spring and the on-going refugee crises are as likely to be taken up as the Greek polis or the Roman Republic. Overall, the essays are lively rather than ponderous. Most of all, they allow the vitality of Arendt’s thought to emerge into full evidence." (Richard H. King, Professor Emeritus of American Intellectual History, University of Nottingham, UK, and author of Arendt and America)

"This volume offers refreshing readings of Hannah Arendt as a theorist of freedom. The contributors expand our interpretive horizon by examining a wide array of Arendt’s works and putting her into conversation with a diverse range of interlocutors such as Isaiah Berlin, Frantz Fanon, Karl Marx, Philip Pettit, and John Rawls. Taking as their "guideposts" what Arendt calls "incidents of living experience," they offer illuminating reassessments of her arguments in light of challenging contemporary problems." (Ayten Gündoğdu, Associate Professor of Political Science, Barnard College, USA, and author of Rightlessness in an Age of Rights: Hannah Arendt and the Contemporary Struggles of Migrants)

"What Hannah Arendt wanted was for people to think for themselves, while paying close attention to the crises of their own times. In this volume, the authors have done just that – engaging contemporary political philosophy in conversation with Arendt and with unexpected and unprecedented events unfolding around the world and across the earth in our time. The result is a multi-faceted examination of the political challenges and failures with which we are surrounded. Are there aspects of Arendt’s thought that can assist us to make sense of what is and is not happening today? The verdict from this fine collection of essays is a carefully considered and critically qualified yes. This book is a welcome contribution to contemporary political philosophy." (Lucy Tatman, Senior Lecturer in Philosophy and Gender Studies, University of Tasmania, Australia)

Ethics and the Contemporary World 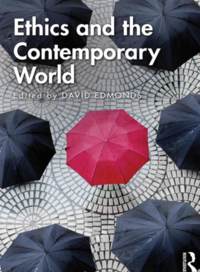 Arguments about ethics often centre on traditional questions of, for instance, euthanasia and abortion. Whilst these questions are still in the foreground, recent years have seen an explosion of new moral problems. Moral and political clashes are now as likely to be about sexuality and gender and the status of refugees, immigrants and borders, or the ethics of social media, safe spaces, disability and robo-ethics.

How should we approach these debates? What are the issues at stake? What are the most persuasive arguments? Edited by best-selling philosophy author David Edmonds, Ethics and the Contemporary World assembles a star-studded line-up of philosophers to explore twenty-five of the most important ethical problems confronting us today. They engage with moral problems in race and gender, the environment, war and international relations, global poverty, ethics and social media, democracy, rights and moral status, and science and technology.

Whether you want to learn more about the ethics of poverty, food, extremism, or artificial intelligence and enhancement, this book will help you understand the issues, sharpen your perspective and, hopefully, make up your own mind.

"This is a superb collection of 25 short chapters on current ethical issues. The pieces included are accessible, brisk and often arresting, ensuring that the book will have an important role to play in both philosophical and public discussion." - Philip Pettit, Princeton University, USA, and Australian National University